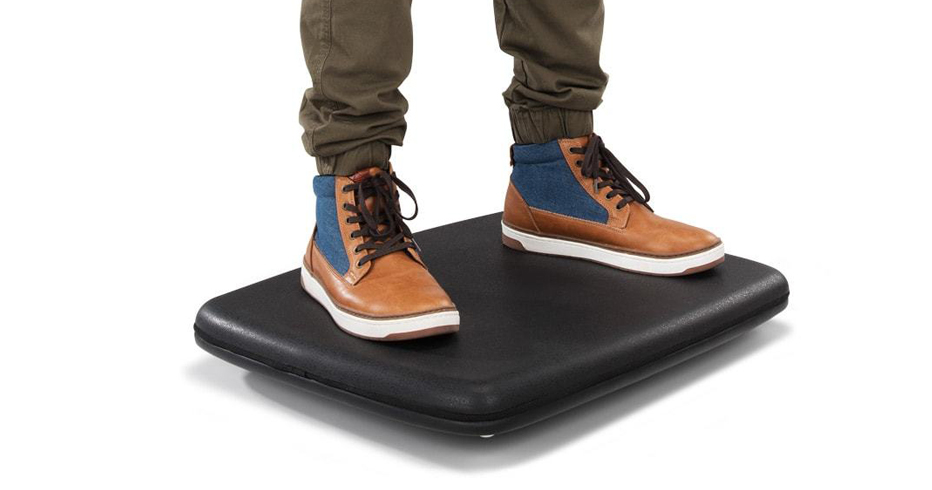 So in your never-ending quest for office toys that keep you fit while you’re pounding away at your keyboard, you probably have come across the idea of the motion board. Basically if skateboards and rocking chairs could have offspring, those babies would be the motion board. You can’t really skate on them but they’re great for rocking. In fact the rocking motions that one can do on the motion board are a fantastic way to stay active during the work day and you’ll get a little leg workout in the process. Maybe even some abs if you’re hardcore about it. The motion board comes in various designs, with some looking like the lower half of an exercise ball and others looking a bit more like my previous skateboard comparison. UPLIFT Desk has started producing some newcomers to the field of balance board technology in the form of the E3 and E7 Motion Boards.

We went over some of the cool stuff you can do with the E3 already but here’s a quick recap. The E3 Motion Board is going to be better for your budget but it has a slightly steeper learning curve. In terms of functionality you can do everything that you can do with the E3 with the E7. However, the E7 does have a couple of features that set it apart from its little brother. When it comes down to durability the E7 is going to be the winner just by virtue of being made of a thicker material. The E3 is less than an inch thick of hard plastic while the E7 is much thicker. You’ll lose a little of the range of motion you get with the E3 but the E7 is also much easier to get used to because of that. As previously mentioned, you can do all of the same little exercises with the E7 as you can with the E3. The two main ones being the Rock and Tilt. For those who haven’t looked at the E3 blog post, you can perform the Rock and the Tilt by following these simple instructions:

Rock: Move side-to-side by pushing down on one side, or using a similar motion to that of walking up a set of stairs. Right down, left up. Then left down, right up. This will get you moving in the Rocking motion.

Tilt: To try this move, push forward with the ball of your foot and your toes, and then push back with your heels. Use strength from your ankles and calves to push forward and backward to do the Tilt. Now you’re moving!

You may notice the absence of the swivel exercise. You can still do it with the E7, it’s just more effort due to the larger base size. But honestly it’s better not to attempt that one with either board until you’re used to the balance points. Once you get to that point though, it’s a pretty good one for your core.

All things said and done, the E3 and E7 are both great products that do basically the same job. The E7 is definitely the more durable of the two hands down with its increased thickness. The wider base does reduce your range of motion but not enough to really have much of an effect on the benefits you get from using a balance board. The E3 is probably the easier of the two to move out of the way though just due to being the lighter of the two. If you still find yourself wondering which balance board is right for you, that’s perfectly fine. We have a dedicated staff of people here to help you with just those very questions. Give them a call at 800-531-3746 and they’ll be more than happy to help you find the product that’s right for you!

Get the latest updates on new products and upcoming sales